Elizabeth Sarian ’11 is an emerging operatic mezzo-soprano currently in her second year as an Artist-in-Residence at the Atlanta Opera, where she is performing operatic roles in shows such as La Cenerentola (Cinderella), Salome, Madama Butterfly, La Traviata, Dead Man Walking, and Eugene Onegin.  Elizabeth spent her past two summer seasons as a member of the Apprentice Singer Program at the Santa Fe Opera, and was previously a Studio Artist in Central City Opera’s training program in Colorado.

Elizabeth is a graduate of the Peabody Institute of the Johns Hopkins University, where she earned her Master of Music in Voice Performance and Vocal Pedagogy, plus a Graduate Performance Diploma.  Elizabeth earned her undergraduate degree in music at Hofstra University. During her academic studies, Elizabeth performed many operatic roles, her favorite being Cherubino in Le nozze di Figaro (The Marriage of Figaro) at both Peabody and abroad in Italy. Her favorite concert/orchestral works performed include Handel’s Messiah with the Frederick Chorale, and Beethoven’s Ninth Symphony with the Baltimore Choral Arts.

Elizabeth has been awarded two Encouragement Awards from the Metropolitan Opera National Council Auditions, and is a two-time recipient of the George Castelle Memorial Award in Voice from Peabody Conservatory.  In addition to her love of performing, Elizabeth has held staff positions as a private voice instructor and a teaching residency at the University of Maryland, Baltimore County. 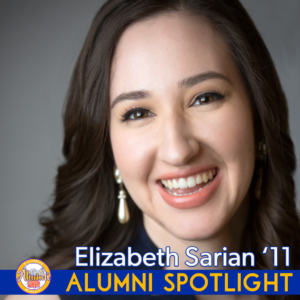 Kellenberg was and continues to be the place where the foundation of my faith, relationship with Jesus Christ, and prayerful adoration of the Blessed Mother began. The importance of having teachers and mentors willing to help and guide you is essential to success in any field, and I was fortunate to experience that first at Kellenberg.  I also made many lifelong friends in high school, and learned what it is to be part of something greater than myself in and out of the classroom. When I travel, I always take something from Kellenberg with me.

What has been the most fulfilling part of your professional journey thus far?
The most fulfilling opportunity I have been granted so far was working for two summers at the Santa Fe Opera house in their Apprentice Singer Program. Highly competitive to get into, the mere result of being accepted into such a fine program (and consequently participating in it) is an accomplishment I will always hold close to my heart.  I find it particularly fulfilling to practice tirelessly for something, and to subsequently witness the fruits of that labor, something that applies to any career and field.

Do you have any advice for students or alumni who are interested in pursuing careers in the arts?
A career in the arts is a challenging, rewarding pursuit, similar to training for a sport.  It is a labor of love, and one must learn to be comfortable with the uncomfortable, while working to build confidence and resiliency.  It is keeping in mind that the outsider or audience sees only the finished product, never the weeks, months, or years of training that led to that final bow.  The best advice I can give is: there is no singular path to pursuing a career in the arts, but it is essential to find the right mentors — “your team” — and to be a strong communicator and kind colleague.  If you’re considering pursuing the arts, take just one small step; you never know where it may take you!

Who was your favorite teacher/class, moderator/club, or coach/team from your time as a student here, and why?
I must give an immense thank you to Mr. Alex Basile.  Not only was I able to work with him weekly as a member of Gregorian Consortium, but also daily as a student of his Christian Existence class my senior year.  I still re-read the books we studied in that class. He is a generous man of faith, and a life teacher. During a recent visit to Kellenberg, he made time to speak with me about life and faith, and it felt as if no time had passed.