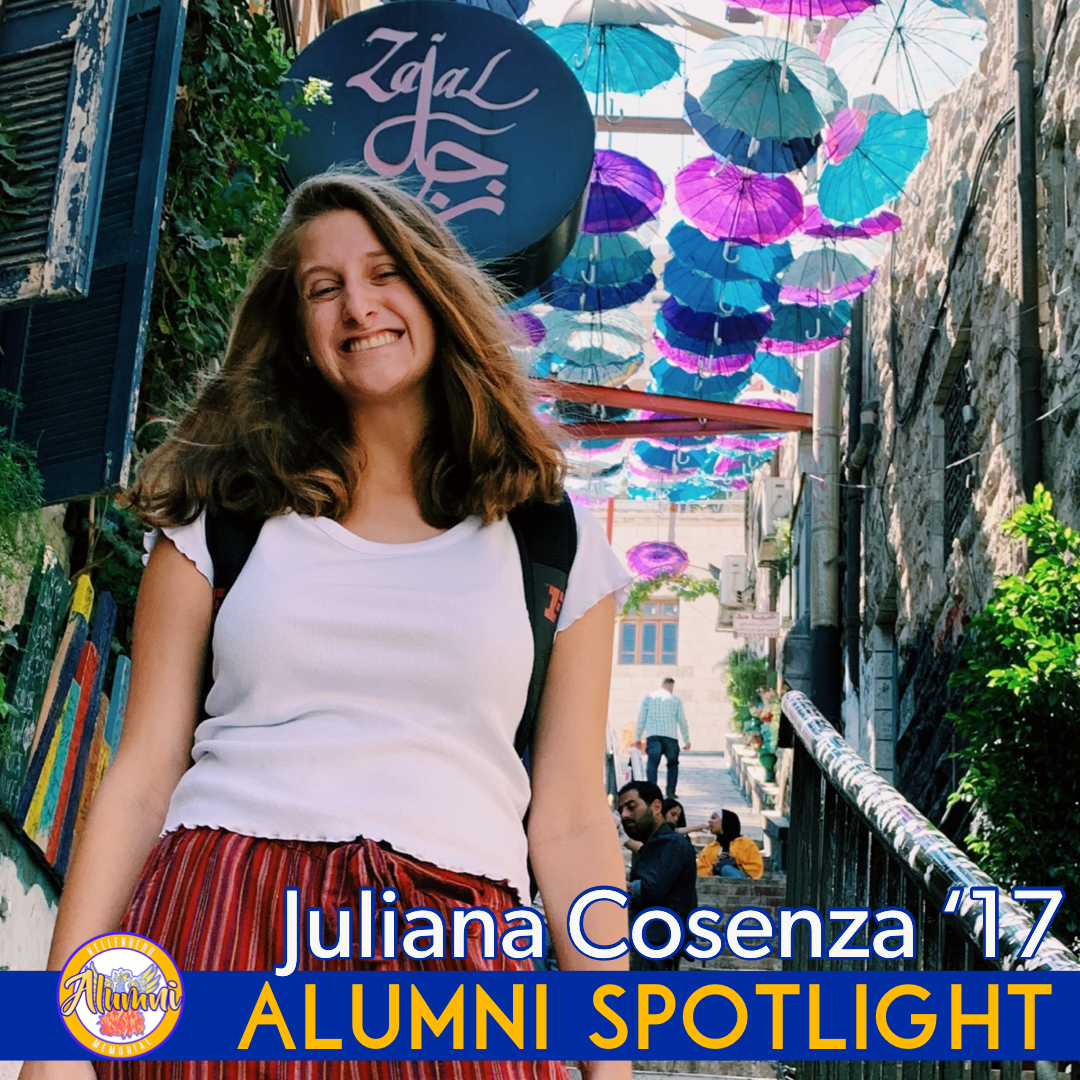 Juliana Cosenza ’17 is a Global Interdisciplinary Studies & Arab and Islamic Studies major with a minor in Peace & Justice Studies at Villanova University.  She is currently studying abroad in Amman, Jordan with AMIDEAST’s Arabic Language and Middle Eastern Studies program. Additionally, she is working at Un Ponte Per (UPP), an Italian NGO that provides aid to burdened individuals, such as refugees, in the Middle East and North Africa region. She is interested in attending law school after graduating from Villanova next year, and she is passionate about civil law, especially immigration law.  Last summer, Juliana interned at Dawn Pipek-Guidone & Esq., an immigration law firm in Mineola, NY. Throughout her internship, Juliana was able to practice various legal writing, research, and communication skills; additionally, she was inspired by this internship experience because its purpose was rooted in social Catholic teachings, such as the life and dignity of the human person. Upon returning to the United States in the spring, Juliana is excited to not only build upon these skills but also work in such environments that motivate her to make a difference in her community.

While I had always considered my experience at Kellenberg transformative, I never realized to what extent until after I had graduated.  For example, one of the most life-changing events in my life was my participation in Project Understanding, an interfaith pilgrimage between Christian and Jewish teenagers to the Holy Land in Israel and Palestine, during my junior year of high school.  Although this program was technically not Kellenberg-sponsored, Kellenberg’s cooperation with the program has allowed multiple Marianist Brothers to serve as the Christian mentor of the program. Additionally, multiple Kellenberg students were also participants on our trip, making its experience go hand-in-hand with my high school experience; however, its implementation was very different.  For the first time in my life, I had traveled outside of the United States, engaging in deep conversations surrounding interfaith and cross-cultural dialogue while exploring the many religious and cultural landmarks of both countries. From this experience, I became so connected to not only my faith and other participants on the trip, but also the beautiful places I had visited. To this day, Jerusalem remains the most beautiful and important city in my life.  During my semester abroad in Jordan, I had the honor of returning to this beautiful city, and it has been even more transformative returning to a place that has meant so much to so many people since its creation. The ability to engage in this experience and return to Kellenberg with a whole new perspective had changed me forever. When I applied to college, my life-changing experiences in Israel and Palestine inspired me to take Arabic as my core language requirement, and sooner or later, I had grown fond of a beautiful language that constantly reminded me of my experience with Project Understanding, an experience during my high school years that continues to define myself every single day.

What attracted you to the Arab and Islamic Studies major?

Following my previous answer, what inspired me to become an Arab and Islamic studies major was partaking in Project Understanding during my junior year of high school.  With thirteen other Jewish and Christian teenagers, a Rabbi and his wife, and a religious brother, I explored the various parts of the Holy Land while simultaneously engaging in critical conversations surrounding theology, philosophy, and culture. My experience engaging in this interfaith dialogue really allowed me to appreciate interfaith activism and solidarity.  From this trip, I found one of my best friends, who was a Jewish student on the program, and our friendship has continued to grow throughout the years because of our open embrace to difference. So when I had chosen to take Arabic as my language requirement in college, I noticed similar themes that I had embodied on Project Understanding: empathy, interfaith activism, and open-mindedness; additionally, I love challenging myself and that is why I persisted in studying Arabic despite the difficulties of learning a new language with an entirely different alphabet.  However, I have been so thankful to have the privilege and opportunity to study in Jordan this fall. I have been able to embrace my openness and passion for the Arabic language and culture in a way I never have before. Additionally, due to Amman’s large Palestinian-Jordanian population, images of the Dome of the Rock in Jerusalem are everywhere, and this makes me feel even more at home, knowing that Jerusalem has just as much meaning here.

How do you think Kellenberg helped you prepare to transition successfully to the rigors of higher education?

I think my academic experience at Kellenberg rightly prepared me for the rigors and challenges of higher education.  As a student in the College of Liberal Arts, I felt as though my writing skills were crafted in high school, which did give me an advantage over other students in some of my classes.  I feel as though my research experience in my English classes at Kellenberg allowed me to more easily transition into the writing expectations of a college student.

Who was your favorite teacher/class, moderator/club, or coach/team from your time as a student here, and why?

My favorite class throughout my seven years at Kellenberg was my sophomore year history class with Mr. Buckley.  I had admired Mr. Buckley’s infinite knowledge about European history, but more so, I admired his ability to connect with his students.  Every day, Mr. Buckley had a quote of the day on the board, either relating to current events, song lyrics, etc. From the first day of class, I had written down each quote in my notebook, and at the end of the year, I composed a photo book containing all of the quotes.  It was an enjoyable experience being in Mr. Buckley’s class and learning from him.

Another class that I have not forgotten was my freshman year English class with Mrs. Marconi.  I remember discussing such crucial pieces of literature that year, such as To Kill a Mockingbird, and of course, Mrs. Marconi’s absolute favorite, Our Town.  This class allowed me to explore my introspective side while analyzing literature, and I loved Mrs. Marconi’s ability to make us think so critically as a freshman. These are still pieces of literature that I continue to re-read and think about in different ways. And of course, one of the most amazing moderators I have had at Kellenberg throughout my experience is Mrs. Harnisch, who always welcomed my energetic self into her office every morning before homeroom.