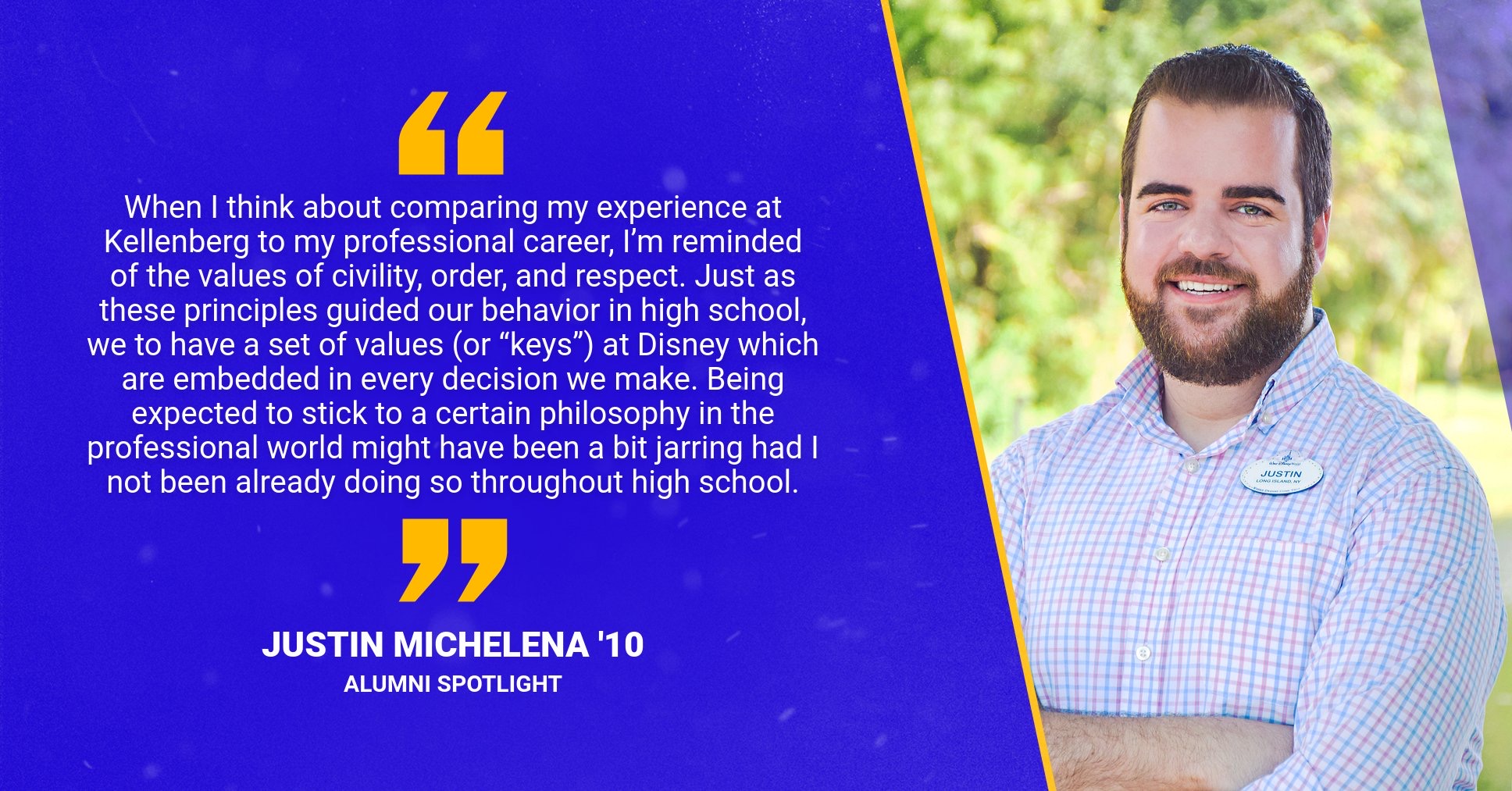 Justin Michelena ’10 is a graphic designer with the Walt Disney World Communication Strategy team. The team is responsible for the design and production of print collateral for all Walt Disney World Resort properties, which includes four theme parks, two water parks, Disney Springs, ESPN Wide World of Sport Complex, runDisney events, more than 20 resort hotels, and many special events throughout the year. Justin is also the lead designer for one of Disney’s highest visibility pieces: Theme Park Guidemaps. The maps are produced in six different languages plus a Guide for Guests with Disabilities for each park, with more than 30 concurrent versions in-market at any given time. Prior to joining the Communication Strategy team, Justin’s career at Disney began in the Disney College Program, where he was an Attractions Host at Kilimanjaro Safaris at Animal Kingdom. From there, he was selected for a Professional Internship with the Guest Communication department. Justin reflects on his professional experience thus far saying, “With Disney being such a large company, I have had the opportunity to experience a multitude of roles and disciplines. I’ve been extremely lucky to already have a bit of creative experience under my belt in event design, planning and execution, print production, and digital media development. As I look to my future goals, I’m excited to explore more in the realm of special event design and live entertainment, as well as whatever new opportunities come my way.” Justin holds a bachelor’s degree in graphic design and a master’s degree in media design.

What inspired you to pursue a degree in graphic design?

I’ve always been a creative person and interested in learning how to make my ideas a reality. This started from just playing around with Photoshop and Illustrator, and figuring it out as I went along. Since there are so many different disciplines in the professional creative world, I had a difficult time locking-down specifically what I wanted to pursue. When I participated in a Professional Internship at Disney as a liberal studies major, I was given the unique opportunity to meet and work with the Walt Disney World Print Collateral team. Learning from fellow creatives about their individual journeys helped me shape my career goals and plan my own path to achieve them. My bachelor’s degree in graphic design is a great interdisciplinary foundation that I can use in almost any creative profession. I have also earned a master’s degree in media design which allows me to apply the fundamentals I learned to the ever-changing landscape of modern media.

When I think about comparing my experience at Kellenberg to my professional career, I’m reminded of the values of civility, order, and respect. Just as these principles guided our behavior in high school, we too have a set of values (or “keys”) at Disney which are embedded in every decision we make. Being expected to stick to a certain philosophy in the professional world might have been a bit jarring had I not been already doing so throughout high school. There are also some more concrete examples, like the dress and appearance guidelines at Kellenberg, that are very similar to the “Disney Look Guidelines.” I strongly believe that Kellenberg’s expectation of excellence caused me to hold my own work to a high standard. This helped me jump into the professional world and set myself apart from other young professionals.

Do you have any advice for current students or young alumni who are interested in pursuing a degree in graphic design?

Graphic design is a really great foundation for any creative field. While in school for graphic design, you’ll be a jack of all trades and not only learn about many different disciplines, but you’ll also be required to produce the work of those disciplines, too. This might cause you to find something that you really enjoy and focus more on it, perhaps becoming a specialist in that area. In the “real world,” you’ll most likely rely on other designers who are specialists in the areas that you are not. Don’t think that just because you can’t draw or don’t enjoy a specific part of the creative process that you can’t be a successful designer.

Throughout college and into your professional career, it’s really important to remember that networking is key for any profession. I was actually introduced to my current manager almost five years before she hired me and we kept in contact until a position became available. Creative roles are a bit more “few and far between” than most might think. Sometimes it just takes a bit of patience, and growing and developing in the interim. When the time does come and a position opens up, you want to make sure that your name comes to mind. It’s also important to learn from every opportunity you’re provided along the way. You’re most likely not going to land your dream job right away. So if you’re given an opportunity that isn’t an exact fit, don’t immediately dismiss it. See if there’s anything at all that you can learn from it that might make you more well-rounded and valuable. That seemingly insignificant skill that you have might just be the thing to put you above another candidate being considered.

Finally, If you’re interested in a creative field, having a well-thought-out portfolio is just as important as your formal training or professional experience. It’s very difficult as a young creative to overcome the fear of being judged on your work that you know isn’t amazing quite yet. We’ve all been there, so don’t let it discourage you. Although I, myself, am still relatively young in the professional world, I’ve had the opportunity to meet with young designers as well as take part in the process of hiring our design interns. When reviewing their portfolios, we’re looking for potential rather than the success or failure of the designs themselves. It’s pretty easy to tell who has an “eye for design” and who doesn’t, even if their portfolio isn’t professional-grade work.

I spent a lot of time in ETV and Technical Services during my time at Kellenberg. Our moderator, Mr. Harris, really encouraged and enabled us to explore our interests, whether that was photography, audio, video, or in my case, graphics. He really was the first of only a handful of people who I credit with being a mentor of mine in the creative space. He gave me projects which at the time challenged my abilities and ultimately ended up being part of my first portfolio. Today, I consider Mr. Harris one of my good friends. We speak often, either with a technical question for each other, or just to catch up, and grab dinner whenever he visits Florida or I’m up in New York.