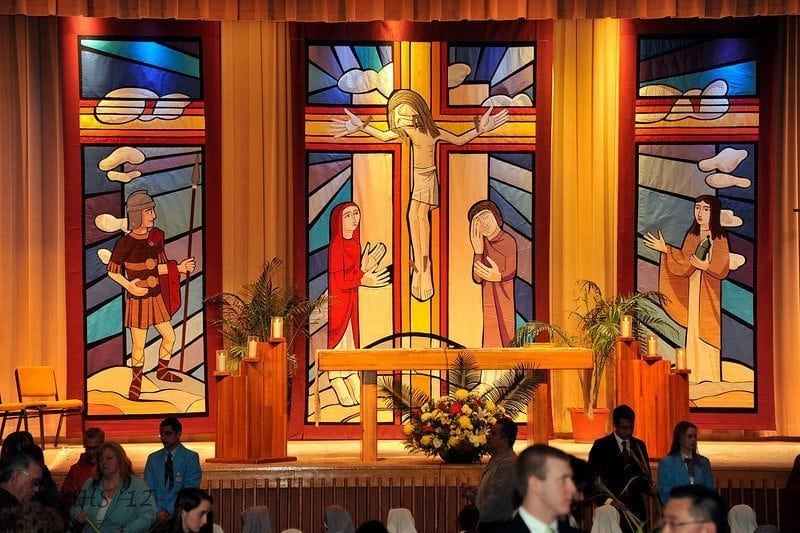 By Gabrielle Harvey, class of 2015
On March 24, 2013, Kellenberg Memorial High School held its annual Palm Sunday Communion Breakfast for grades 10 through 12. The event is always a great way for Kellenberg students, families, teachers, and alumni to gather together to celebrate Palm Sunday, or “Passion” Sunday. The celebrant of this Mass was Father Todd Saccoccia, S.M..
During Mass, Father Todd was assisted by a few students including seniors, Julian Taborda and Kara Cramsie, who helped recount the Gospel of Jesus’ passion. The Gregorian Consortium led by Mr. Alex Basile sang while many sophomores and juniors helped in the procession of the Mass by carrying flags and crosses. Many other Kellenberg students participated in the Mass by serving as Eucharistic ministers, ushers, and by participating in S.A.L.T. during the event. After the beautiful homily, which focused on the beginning of the passion of our lord Jesus Christ and preparing ourselves for the Easter season, palms were distributed out to all. In the book of Leviticus, “palm fronds” (fern-like branches) were associated with rejoicing. Along with rejoicing, the palm branch has also symbolizes victory. During the triumphal entry of Jesus, while He rode toward the city a great crowd heard that Jesus was on his way to Jerusalem, so they took palm branches and went out to meet him. Jesus knew that this was going to happen. In the book of Revelation, the redeemed are “standing before the throne and in front of the Lamb…wearing white robes and…holding palm branches in their hands.” (Revelation 7:9)
After the conclusion of the Mass, a lovely breakfast was held in the cafeteria with a speaker. The annual Palm Sunday Mass was a great way for the Kellenberg community to come together to celebrate Holy Week and to prepare for the joyous Easter season.