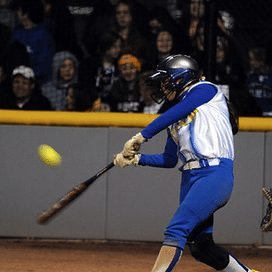 Article by Christina DiMasso, class of 2014:
On Saturday, April 5th the Kellenberg Memorial Varsity Softball team faced off against Long Beach in a game to benefit one of Kellenberg’s beloved faculty members, Mrs. Alicia Walsh. The girls went into the game following the words of their head coach Mr. Ken Conrade, who told them never to give up on this game because Mrs. Walsh never gave up on them. The game was held at Molloy College’s softball field in Rockville Centre at seven o’clock at night. The bleachers filled with other Kellenberg student athletes, members of the faculty , families, as well as the doctors and staff of the research hospital in which Mrs. Walsh was treated. The excitement of the game lasted from start to finish.
Kellenberg led the game 1-0 until the fourth inning when Long Beach scored eight runs. Kellenberg’s girls fought back in the bottom of the fifth when they scored seven runs, which put them down only one run and brought the game to 9-8. In the bottom of the seventh junior Amanda Riviera bunted to get to first base and then stole second. Senior lead-off hitter Krista King then hit a sacrifice fly to right field which enabled Amanda to advance to third. Senior Nikki Ditizio hit a double to left field which brought Amanda home, tying the game 9-9. Sophomore Alexa Russell hit a ball to right field which brought Nikki home to score the winning run. Kellenberg won the game and truly followed Mrs. Walsh’s example in her difficult fight against cancer.
This benefit game raised an impressive total of $4,153, all of which went to the Don Monti Cancer Center at Huntington Hospital, the research hospital that treated Mrs. Walsh. The game brought the Kellenberg family together in support of a great person and a great cause, and the softball team’s win was enjoyed by all.