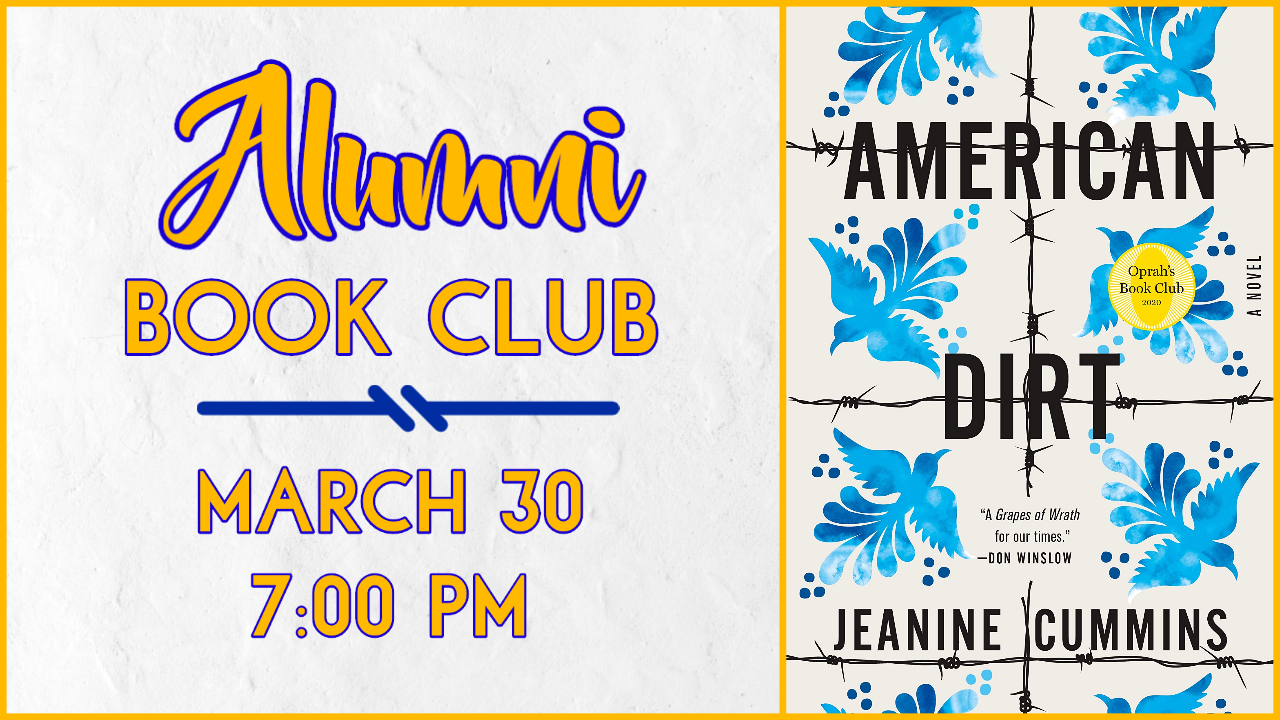 We are pleased to invite all alumni to participate in the upcoming meeting of the Alumni Book Club!

On Monday, March 30th, we will gather at Kellenberg Memorial at 7 PM to discuss our next selection, American Dirt, by Jeanine Cummins.  Please RSVP below.

For those who are unable to attend the meeting in person, we will be live-streaming fully interactive coverage of the event. Please register using the link below by Friday, March 27th.  Any questions may be directed towards the Alumni Office at (516) 292-0200 x396 or alumni@kellenberg.org.

Mrs. Cathy vonSchoenermarck, moderator of the Alumni Book Club, provides a synopsis below:

WHAT’S ALL THE FUSS ABOUT CUMMINS’ NOVEL???

Prior to its 2020 public release, American Dirt was being heralded as a “Grapes of Wrath for our times” and a “new American classic.” Soon after, Oprah Winfrey jumped onboard and named it to her Book Club selection list.  American Dirt also received glowing reviews from Mexican-American writer, Sandra Cisneros, who called it “the great novel of las Americas” and “the international story of our time.”  And then the firestorm hit…

Claims were made that Cummins–of Caucasian descent–had no business penning a novel about the experiences of Mexican immigrants.  Eighty-two writers signed an open letter to Oprah, asking her to reconsider her endorsement of the book, and critic Daniel Olivas of The Guardian called the book “an insult to Latinx writers who have toiled–some of us for decades–to little notice of major publishers…”

Interestingly enough, Adam Kirsch in his article, “What We Should Read,” observes:  “An obvious danger in this debate is that it threatens to deny the basic truth that makes literature possible:  that we are capable of understanding lives and worlds very different from our own. If the old saying, ‘write what you know’ is taken too literally, the writer can only tell stories about people who share his or her exact biography.  But Henry James wasn’t an 8-year-old girl when he wrote ‘What Maisie Knew,’ any more than Ursula Le Guin was a wizard when she wrote ‘A Wizard of Earthsea.’”

So let’s do it.  Let’s read American Dirt.

This is the story of Lydia Quixano Perez who enjoys a comfortable life in Acapulco, Mexico with her journalist husband, Sebastian, and her eight-year-old son, Luca.  Lydia runs a bookstore and befriends a charming customer, Javier, who seems to have a deep and abiding appreciation for great literature. However, Javier turns out to be extremely different from what and who he appears to be, initiating Lydia’s frantic and dangerous escape from Mexico to America.  With her little boy at her side, Lydia becomes one of the thousands of undocumented immigrants attempting to find freedom in her quest to reach el norte.

Come join us then for the next Alumni Book Club meeting!!