On January 27th, the Boys Varsity Basketball packed their bags on a school bus and took a trip to Founders Hollow for our annual retreat with Coaches McCutcheon, Lyons, and Defino. We were all excited for the two days ahead of us. After a three-hour bus ride filled with humor and even a sing-along, we arrived at Founders Hollow.

This was the first time many of my teammates had been to Founders and they were all taken away by the spectacular scenery. After we unloaded the bus, Coach Lyons gave us all our room assignments. We then unwinded in the lodge as Coach McCutcheon gave us an informative speech on the history of Founders Hollow. 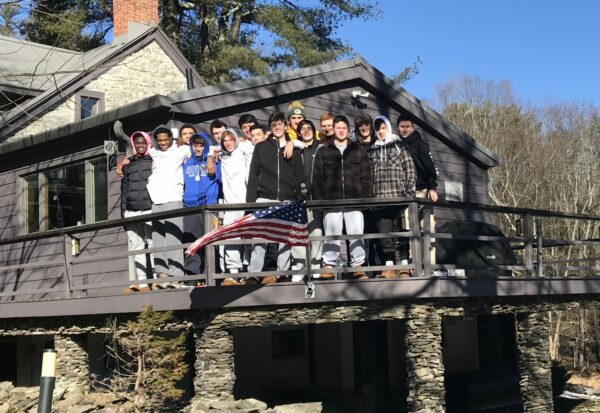 We then spent some downtime watching films and playing card games in the media room while Coach Defino prepared a delicious ravioli dish for us. After saying grace, we all devoured the ravioli and meat sauce with garlic bread which Coach Defino put together. We enjoyed this dinner so much that almost the entire team would go back for a second serving, which would be a regular practice for all of Coach Defino’s meals. When I asked Forward John Kwiatkowski 22’ about the meal, he replied “The food was amazing! I hope he plans on cooking like this all retreat.”

Later into the night, Coach Lyons had us watch Coach Carter, an emotional and inspiring sports film. Halfway through the film, we took an intermission to have a snack also provided by Coach Defino. He made various flavored wings which we devoured. After we ate, we finished the movie and had a little more downtime before we went to our respective rooms to end the night.

We woke up at 8 o’clock the next morning to say a morning prayer in the chapel. Coach McCutcheon then gave us a spiritual talk about how God always has a plan for us. Coach also spoke about the film we watched the night before and how a group of players can succeed if their willing to sacrifice their individual selves for the betterment of the team. 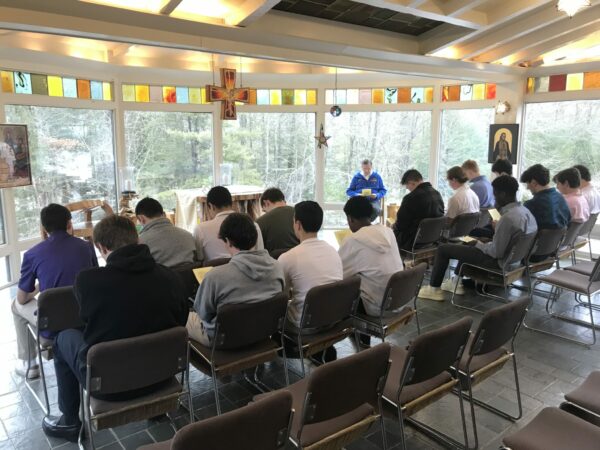 After breakfast, we spent some time some free time bonding as a team outdoors. We played touch football and manhunt before coming back inside for lunch. We then had a player evaluation session with Coaches McCutcheon and Lyons. This session gave us a chance to have a one on one evaluation with our coaches about how the season was progressing from both a team and personal perspective. Evening Prayer service gave us time to reflect on our relationship with God before enjoying a turkey dinner.

After washing up from dinner we had a discussion with Coaches McCutcheon and Lyons on the values of playing on a basketball team beyond “wins and loses”. They taught us the importance of creating bonds with our teammates and coaches that can last a lifetime. We then did a fun experience in which we would write down the first three words that came to mind when thinking about each teammate and coach. We concluded the evening highlighted by teaching guards Joe Durso ‘21 and Liam Collins ‘21 playing a few chords on the guitar!

We had one last prayer service in the chapel on Wednesday morning before eating breakfast and cleaning up before we departed. Coach McCutcheon said it best himself: “The basketball team retreat is one of the most memorable events of the season for the players and coaches.”, and we couldn’t agree more.