In Memory of Dylan Murphy KMHS Class of 2024 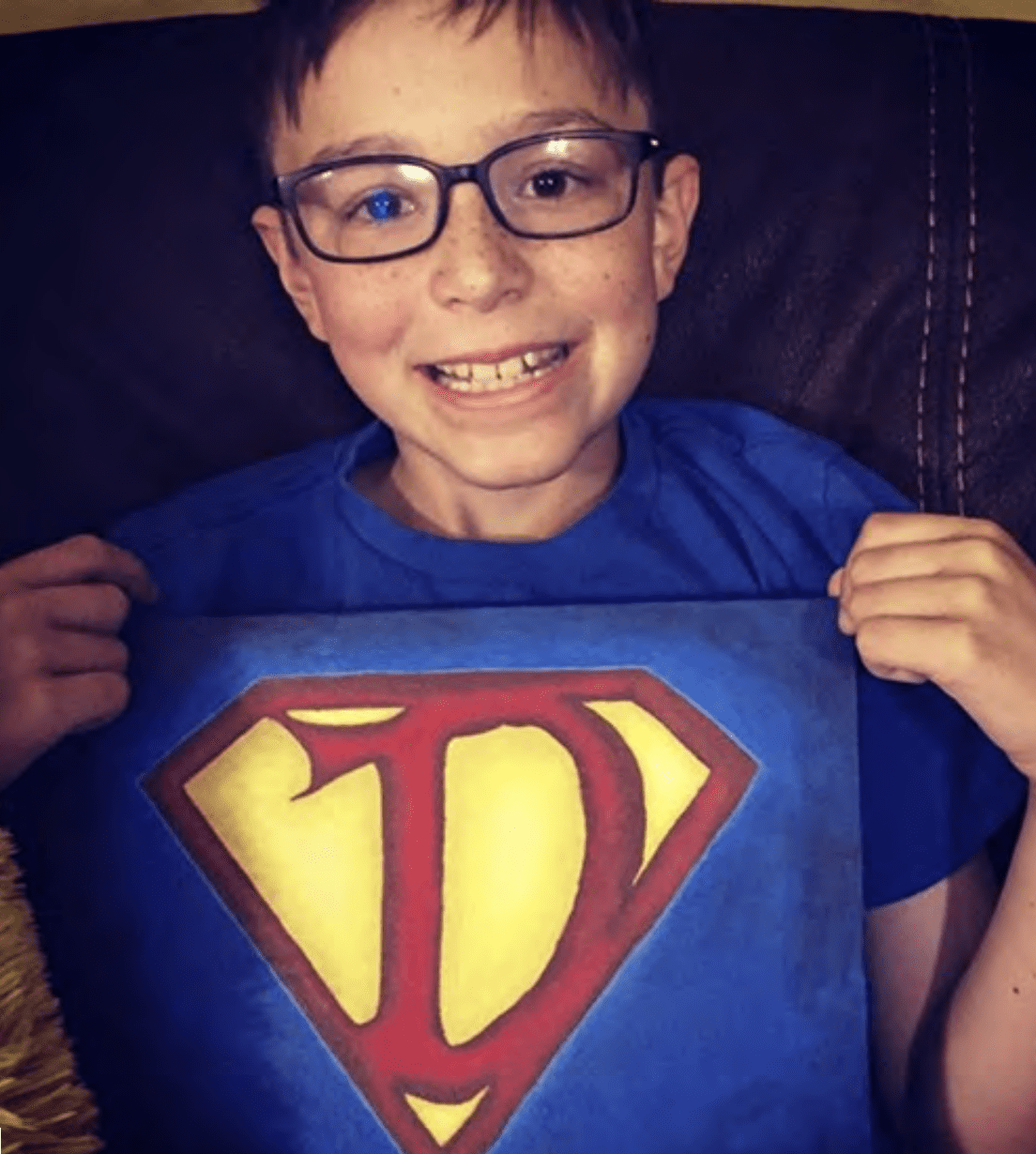 By Phoenix journalist Anya Murphy ’19:
On September 18, 2018, the Kellenberg community said goodbye to a precious new member of the school family. Dylan Murphy ‘24, passed away on DATE, after a long and arduous battle with Leukemia.
Dylan was first diagnosed with a Wilms Tumor on his kidney in December 2015, and struggled through chemotherapy and surgeries. After a year, Dylan went into remission, but was finally diagnosed with Leukemia in April 2017. In August of that year, Dylan had a bone marrow transplant, and recently celebrated its success with a pool party.
The kind of courage it takes to have a pool party in the midst of such a struggle is what defined Dylan’s life, and it is what made him fit in so well as part of the Kellenberg Family. When brother John ‘22, and later Dylan, enrolled at Kellenberg, it was the spirit of family at school that resonated with the Murphy family and made both boys incredibly excited to start school.
Aidan Quinn ’20, was part of Dylan’s close-knit network of cousins. Related to the Murphys through his mother, he spent summers and vacations playing baseball, soccer, basketball and manhunt with Dylan and John.
“I have countless memories with Dylan,” he said. “Although there was an age gap between the two of us, it never stopped us from getting along with each other. We always used to play whiffle ball together and it was always a blast playing the Wii with him and John. Also, over the summer, we spent most of our time together playing or talking about Fortnite.” 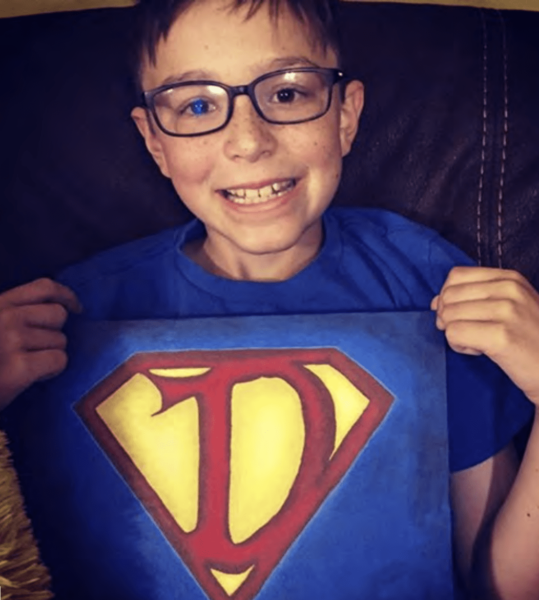 Dylan holds a picture of his own Superman
symbol.

Dylan had a very close relationship with many of his cousins, Aidan included. The “OMC,” made up of cousins from the Otaro, Murphy and Conka families, was a group of people with whom Dylan spent his life. The OMC’s annual family trip to Kalahari Water Park in Pennsylvania was a chance for Dylan to spend time with his family in the arcade or on the miniature golf course. It was on trips like these that Dylan became close with his cousin Aidan. Their relationship only grew after Dylan followed John to Kellenberg.
“I was very excited when I initially heard the news that Dylan was going to Kellenberg and John was going to be a freshman,” Aidan said. “I was looking forward to seeing the both of them in school. I was also excited to help them if they needed any help with their classes.”
“Kellenberg has been a great help in comforting my family and I. It amazes me how supportive the school was. I was so glad when they opened up the ability for people to attend the funeral services. What really caught my attention was during the last day of the wake; Kellenberg teachers and seniors went to pay their respects to Dylan and after that, they started praying. It was started by the teachers and eventually most of the people there joined together and prayed the rosary. This was great comfort for my family and I.”
Glupe ’19, said, “The overwhelmingly supportive response by the Kellenberg community was truly a testament to the motto of ‘One heart and one mind,’ as members of the community, from faculty to students, came together to support the Murphy family in this especially trying time.”
Dylan’s lifelong friend Antonia Marie Satriana ‘24 has lived in the house next door to the Murphy family for her whole life. She grew up in the same house her mother did, just as Dylan grew up in his mother’s childhood home. They have gone to school together since kindergarten, and both transferred to the Latin School from Saw Mill Elementary School just a few months ago. “Probably my favorite memory of Dylan is on the snow days we used to have when we were a lot younger,” Antonia explained. “We live on a dead end street, so there would always be a snow hill at the end of the block, and we would always run down there and make a giant igloo inside.
Fr. Daniel Griffin, S.M., the newly ordained Chaplain of the Latin School, delivered touching homilies at both Dylan’s wake and his funeral.
In his funeral homily, Fr. Dan discussed how, though he only had the opportunity to know Dylan for a few days, the young man’s joyous spirit and overwhelmingly positive attitude changed his life.
“I met Dylan one week ago today at Memorial Sloan Kettering Hospital in New York City. Although I have only known him for a short time, he has had a huge impact on my vocation. I no longer believe in coincidences, but rather ‘God Instances,’” he explained.
When Fr. Dan administered the Sacrament of Confirmation to Dylan, he and his parents chose St. Robert Bellarmine to be his patron saint. By “God Instance,” Dylan’s wake fell on St. Robert’s feast day.
“I could not believe, it and I took it as a sign that the Holy Spirit is among us,” said Fr. Dan.
Another “God Instance” took place even before Fr. Dan met the Murphy family. On August 18, the same day of the pool party celebrating Dylan’s one-year transplant anniversary, Fr. Dan was ordained a priest at Kellenberg. Fr. Dan’s links with the Murphy family were clear in his homily and wake service.
“Father Dan’s homily brought back a lot of memories that we had when we were younger,” said Antonia. “I was surprised that he seemed to get us to a ‘t,’ the way we were when we were little and always hung out a lot.”
Aidan reflected, “Fr. Dan’s homilies were very strong and I can’t thank him enough for what he did. It meant a lot to me for him to talk to me and John to gather information about Dylan. During the funeral, he delivered this amazing homily that perfectly described the life of Dylan. He was able to touch the hearts of everyone at the funeral. I am extremely thankful for Fr. Dan and everything he did for my family.”
Though Dylan cannot be physically here at Kellenberg, his spirit and lasting impact are evident in the ways he has touched so many members of the school community. Singing his favorite “Fight Song” by Rachel Platten and unencumbered by a wheelchair, Dylan is forever in the grace of God, who welcomed him to heaven with the same warm embrace that made him a vital part of the Kellenberg Family.
Categories: Latin School, The PhoenixSeptember 20, 2018
Tags: Latin SchoolThe Phoenix
Share this post
Share on FacebookShare on Facebook TweetShare on Twitter Pin itShare on Pinterest Share on LinkedInShare on LinkedIn