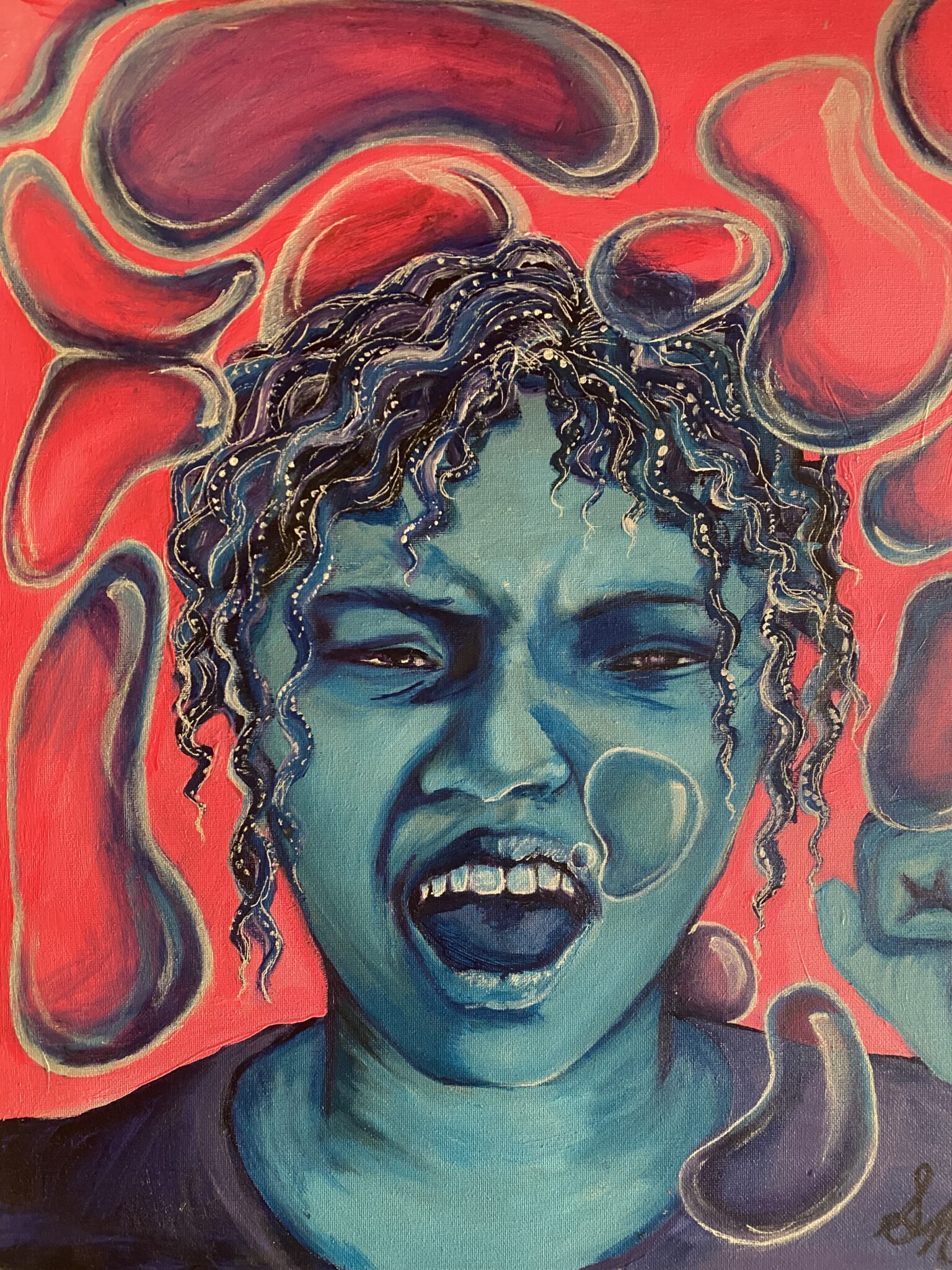 Above:
The Monster Within
by Samantha Nobles, ’22

Such… horror. Such monstrosity. I begged myself to avert my eyes, yet I could not. The terror, it held my gaze.

Before me, I saw such a—wretch. Filthy, abhorrent. Feral were its eyes, glowing with— not a flame of passion, but of desperation, the only source of light among the void it stood a part of. Its claws were long, having been sharpened on the stone of avarice. It must have been one to love punishing its prey, or something just as primitive and evil. In entirety, its figure was ghastly, gaunt— dead.

And yet, it stared. A cold, icy stare. Murderous, I say. I should have feared for my life.

It outstretched a long, cloaked arm, cocking its wrist and pointing directly at me. Square between the eyes. A millimeter away, and yet it dared not touch me. Why?—Nevermind. It had its ways to penetrate me, regardless. A chill like no other went through me, like the harsh bite of frost on steel.

We held a contest, it seemed. Who would give way: I, in fear, shrink away? Or it, in boredom (or perhaps mercy) decide not to prey on what lay before it? Not that this demon could have a conscience. It may have eyes, flesh, and bone, but to give this thing the consideration of beating, human heart, or of intelligent, conscious mind? What absurdity.

It spoke to me. I could hear it internally, yet so distantly too. Its voice (dare I personify the beast) was strangely familiar, as if I once knew the speaker. With how it shook me, one might even say this one was once dear to me. I defer.

It not only spoke, but weeped. Whispered, begged— I almost pitied it. A trick of the mind, surely— and yet, I found myself understanding it. This cryptid, in all beastiality and nature, was suffering. Suffering, suffering—it was on Death’s doorstep, perhaps of its own volition.

It grasped me without contact. For these moments, we were bound by emotion. The creature had a sickly grace, now that I observed it. Much like a phantom of memory, or of dreams. But like all dreams, it had to depart.

Flashing its wide, almost manic grin, it beckoned me to follow it into the shadows of its background. I found myself longing to hand myself over to it, to become limp in the tendrils of the serene mystery, the velvety unknown, that lay beyond—

I blinked. Hard. Shaking my head, I scolded myself. I need to stop looking in the mirror so often.

The Renaissance: My Greek Orthodox Easter / Photo of Nature
May 2, 2022