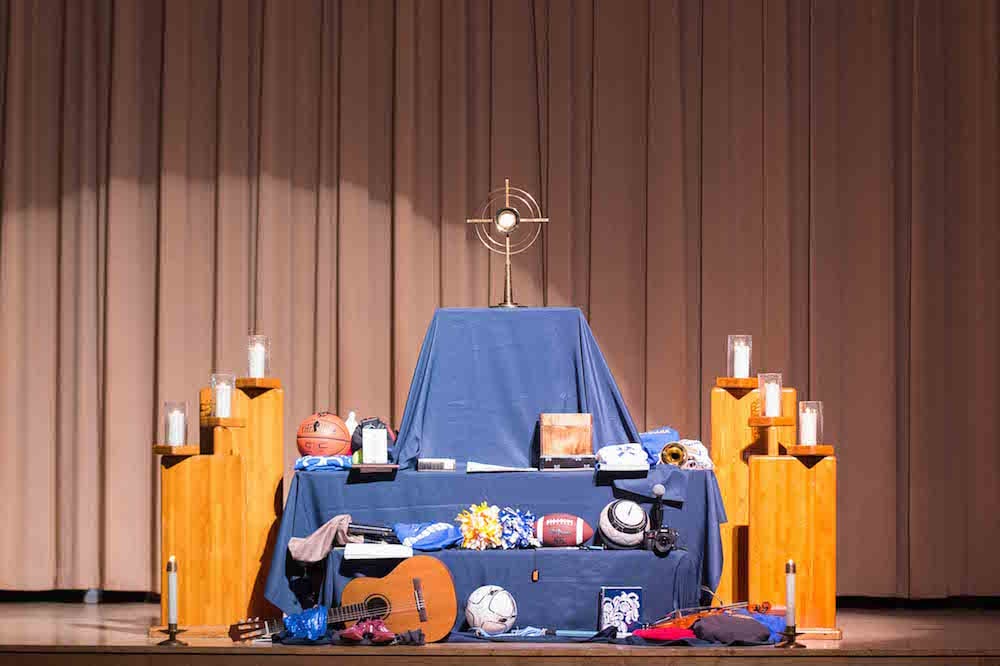 Article by Madison Callinan ’18:
The first ever A.N.O.I.N.T. Day for the class of 2018 took place on November 5, 2015. Sophomores walked enthusiastically into the school that morning, buzzing with excitement for the events to follow. Students wore sweatpants, sneakers, and long-sleeve t-shirts, for which each homeroom had selected a unique color. Colors ranged from highlighter yellow to burnt orange, to sky blue, even army green. It was quite a sight to see roughly five-hundred sophomore making their way through the school to the auditorium. Mr. O’Brien led the assembly in prayer and spoke about the numerous activities and opportunities scheduled throughout the course of the day.
Homerooms traveled together from the wrestling room to the gym, and outside on the fields. In the wrestling room, members of the physical education department taught students CPR and how to use the AED. Mrs. Caesar demonstrated how important, but also physically demanding, chest compressions can be, and the hands-on approach helped give the sophomores a unique, real-life experience. Mrs. Sluka also led the Heimlich Maneuver station, pairing the students up to practice the maneuver. The next day, the sophomores would receive a pamphlet in homeroom with instructions and guidelines to reinforce what they learned. The students moved to the auditorium, where Bro. Roger gave an insightful lecture on working hard and getting involved in your interests. They were reminded on how not to become a “wise fool”, which the word “sophomore” literally means.
Next door, the gym was also home to several games of “A-Ball”, a game created by the members of the physical education department. “A-Ball” is a combination of handball and basketball. After receiving the game ball, participants could either shoot on the goal or shoot for the basket. The cacophony of shouting, cheering, talking, laughing, squeaking of shoes, and the swish of the basketball hoop made the atmosphere electric and exhilarating. Cheers of victory resounded in unison when Mr. York announced the victors. Outside on the fields, numerous athletic competitions were set up, such as soccer fields, tug of war, and gaga ball. Even though mist hung in the air, the soccer games were filled with incredible plays, expert passing, and gorgeous shots that often caused applauding. Tug of war is always a sight to behold, as each homeroom tries to pull the flag over the line for the victory. One of the most notorious events of the day was gaga ball, Mr. Moran’s forte. Encased by a wooden fence, teams battled it out by slapping soft foam balls at their opponents to any area of their bodies from their knees down. Kids groaned when Mr.Moran blew his whistle and called them out. No one wanted to be eliminated from the competitive, exciting game. The homeroom would cheer when their team won in the pit!
As expected, the sophomores became hungry from all the activities and rushed on line for food when the catering came. Delicious dishes such as pasta shells, meatballs, salads, chicken fingers were eaten as quickly as they were served! Circles of students laughing, eating, and talking camped out on the turf fields with their plates of delicious food. Before they headed back inside, the whole class of 2018 gathered for a huge group picture, to remember and treasure the memories they had made.
With full stomachs and happy faces, everyone headed back to the auditorium for the procession and adoration. Members from every club, sport, and activity were represented by members of the sophomore class, from book club to soccer to woodworking club. Processing down the aisle in twos, students gave their artifacts to Fr. Tom Cardone, who placed the various objects under the monstrance on the stage. The message was that everything and anything that we love and that we do is under God and through God. God should always be first in our life. Sophomores Lourdes Rohan and Alyssa Palotta sang beautifully during adoration and received a rousing round of applause.
As the day drew to a close, Mr. O’Brien again addressed the sophomores with gratitude and to commemorate their cooperation. The first ever sophomore A.N.O.I.N.T. Day was a success and a wonderful experience for the class of 2018. Sophomore Mary Casey remarked, “I’m so glad that we had a sophomore spirit day, I had an amazing time that I will never forget!”