The Phoenix: Rob Nolan Leads the Way as Speech and Debate State Qualifier 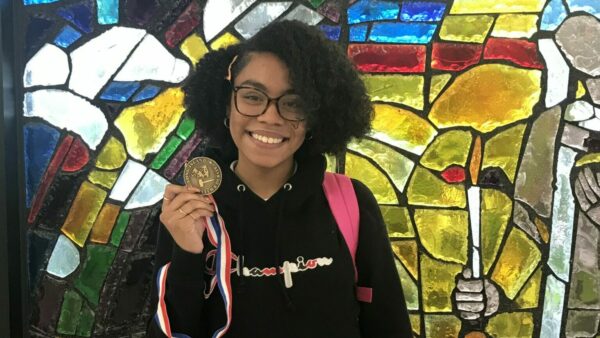 Thanks to modern technology and some dedicated members, Speech and Debate had a first trimester to remember.

At one such tournament, senior Kelise Joly ’21 was awarded a first-place medal.

Throughout the trimester, local tournaments included many topics for members to debate about. The arguments would sometimes stem from being on a political topic as well as other topics such as the military.

Rob said, “My favorite topic that we debated about probably was whether or not voting should be compulsory. There were lots of interesting arguments on both sides that really helped broaden my opinion on the subject.”

Rob, for one, was satisfied with how the first trimester panned out. He stated “Considering the pandemic, I definitely think it’s the best way it could’ve been. It was all over video chat, of course, and while nothing really compares to doing it in person, I’ve had a great time at the debates this year.”

The success that last trimester offered leaves Speech and Debate in a fantastic place. Little, if any changes have to be made, making it a smooth sail for the club. Rob said the club format continued with the same online format, but this time they are competing for a different objective. “Prepping for states is the big thing, but there are also qualifying tournaments to the NCFL national championship and the NSDA national championship.”

With more events to participate in, an inexperienced member would likely get lost in all the schemes. But what makes Rob a great co-captain for the team is his determination and focus on his goals. He declared, “Right now as a co-captain of debate my goal is to try to help as many people get qualified at state elims this February 6th.”

The main topic of the months of January and February is about Lethal Autonomous Weapons and whether or not they should be banned. Rob summed the discussions up as “…essentially debating killer robots.”