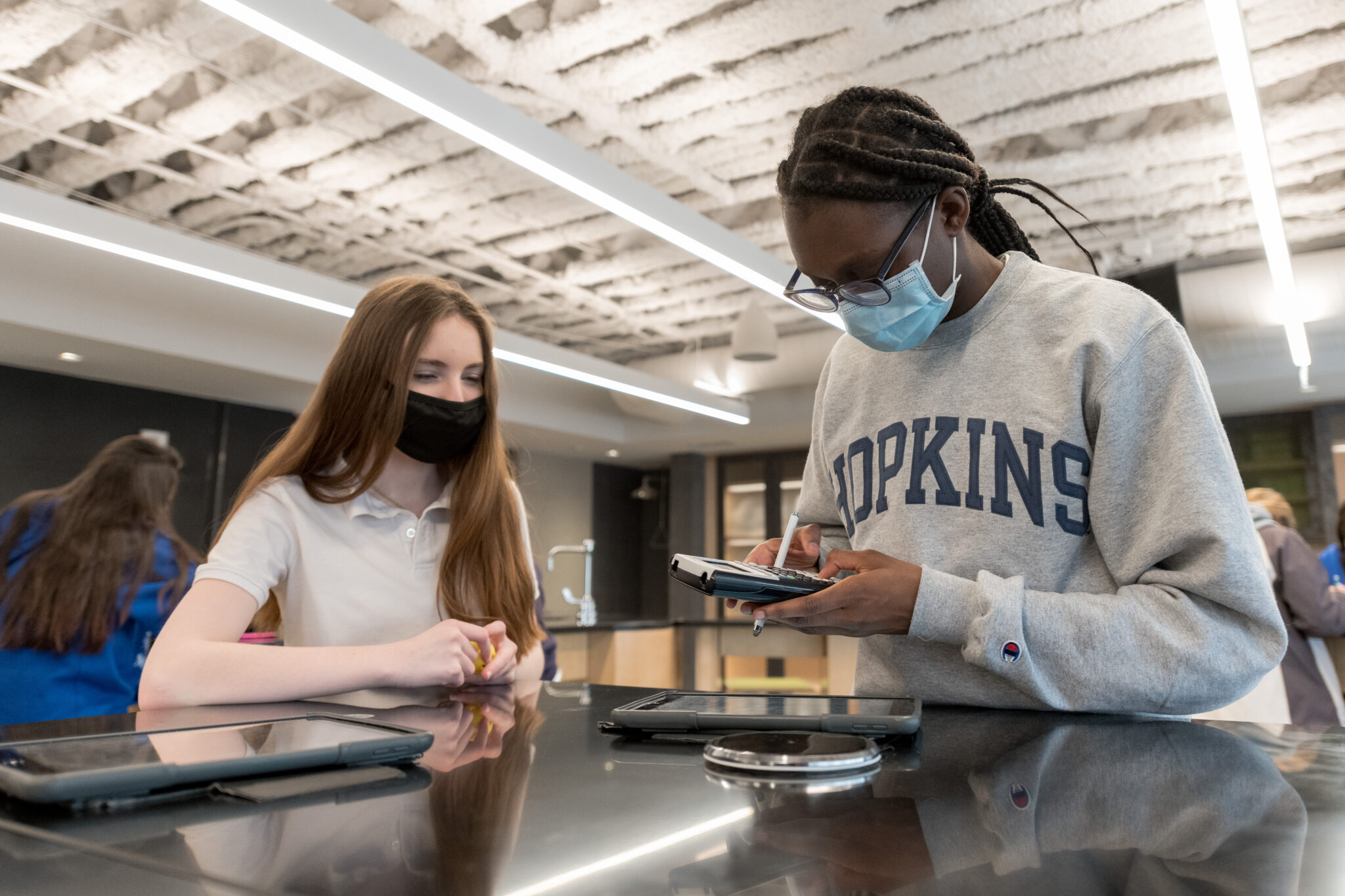 Kellenberg Memorial has opened up its newly-installed lab doors to the class of 2021. Starting January 14, the senior class began its rotation of lab days, beginning with cohorts A3 and C1.

Virtual students followed along through special conferences to observe in-person students as they traveled to and from each new lab, gathering data and testing new equipment in a total of four experiments.

“One lab that I did with my group involved demonstrating gravitational potential energy, in which we attached a weight to an angled and weighted cart, released it, and timed it to see how fast it went. Then, using the mass of the object, acceleration of gravity, and height of the slope, we could calculate the potential energy of the object,” said James Sprizzo.
In another experiment, Kellenberg’s young scientists observed Newton’s Third Law of Motion using balloon rockets. Marc Scocca remarked on the ease with which this experiment was done thanks to the new lab layout. “…Most labs used these movable tables which can be set up for specific experiments. For instance, in one lab we needed to measure the speed and distance of a balloon traveling, so the teacher was able to set up the tables in a way that was conducive to that experiment.”

All labs are equipped with updated televisions with webcams. Emily Uzcha commented on these additions, calling them a “significant improvement,” noting that they guarantee a clear view to all parts of the room of teacher demonstrations.

To sum up, how the lab experience was received, Clara Ambrosino gave her excited thoughts.

“Overall I believe the labs are so cool and Kellenberg has truly done some really amazing work on them!”

Among the most excited students were Science Olympiad members, eager to see the places future generations of olympians will surely call home. 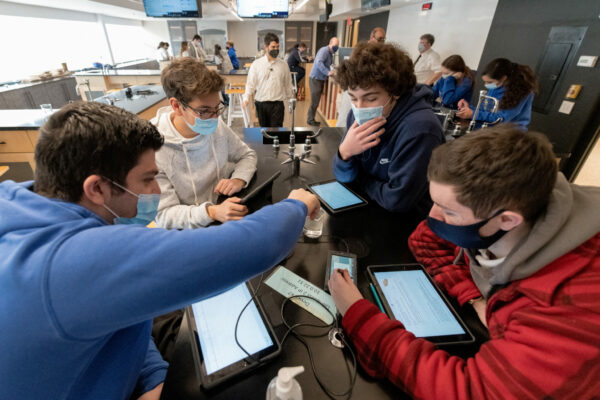 Meaghan O’Keefe, Co-President of Science Olympiad, offered her opinion on the laboratory remodeling.

“I have been doing Science Olympiad since the sixth grade, so I was very familiar with the old labs. I believe Kellenberg did a great job creating these renovations with the interests of the Science Olympiad club in mind. The layout was designed to allow for increased collaboration between team members, whether they are taking a practice test together, performing experiments, or building machines. There is a more professional look that I hope will set the tone for my team as we start up our after-school meetings again.”

“Co-President Julia Zacharsky also shared her optimistic sentiments towards the renovations. “I think these labs will greatly benefit the future of Science Olympiad. Having new, updated equipment will help our team prepare for competitions and enhance the building and studying experience. Having a lab suited specifically for seminar classes and Science Olympiad caters to all of our team’s needs and will definitely be useful for the future of the club.”

With large quantities of books and manuals, as well as impressive models built specifically for competition, Science Olympiad often had trouble containing its array of work material (and award material!) within its confines. One aspect that all club members mentioned was the newfound storage space within each lab.

Marc, Co-Captain of Science Olympiad’s “B Team,” explained, “The Science Olympiad lab is especially unique because it was designed with the use of the team in mind. One thing we
always need is storage space, and the designers of the lab included a cabinet pretty much anywhere it could be.”

James agreed, saying, “With more storage space, students should be able to easily store their projects and notes and know where to find them.”

Overall, Kellenberg is alight with enthusiasm from all students over the lab remodeling, and Firebirds with aspirations in science (or just aspirations in checking out cool new tech) have much to be excited for in the coming years.