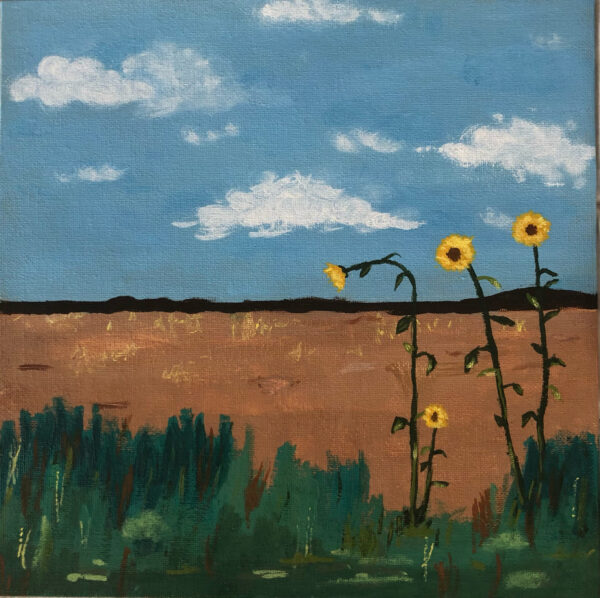 In the month of her birth, the sun hides behind clouds of ash, like it’s afraid of the rain and how it pours and of the screeching thunder that chases after bolts of lightning, striking the rumbling earth. Of course, this can’t be any further than the truth. Somehow, within the midst of a tempest, it almost seems afraid of her. She treads the paths of the universe so carefully and sparingly as the child of stars and comets, favored by Hephastus and Athena who bestow upon her the golden laced gift of artful wisdom, but in the wake of Jupiter, ruler of storm and rain, she finds herself afraid. Her body falls weak, draped with the translucent cloak of fear towards her slowly depleting youth. Something within her begins to stir.

She finds herself scrambling for paint, hurriedly mixing and spewing it against her palms so that as the rain pours, she can pour all that she feels against the porcelain pillars of her home. It doesn’t take long for vibrant colors to be spilled against the floors or for her hands to be stained with marmalade and scraping against stone. To be lost in her own craft– eyes, and mind blurred with indigo and sage while the only thing she can seem to wrap her brain around is the very fact that she is on the brink of losing the remnants of her adolescence as the day of her birth is drawing near (tormented with the desire to never grow old, to chase after the fading age of seventeen). She doesn’t even notice how her tongue begins to burn with the bitterness of rotten cherries and melted stars as the tips of her fingers flush red. She’s rubbing into stone with lavender all whilst aching for the comfort of white sunshine. Her knuckles begin to bruise.

From porcelain pillars to stone canvases of sage and marmalade, arraying milky moons and yellow suns that beam down upon villages of mice who nibble on indigo mushrooms and magenta puffs of dandelion. It’s something made of dreams. Her breathing, which had grown heavy, begins to calm once she notices that every single one of her twelve pillars has lost its pristine whiteness, now cursed with her panicked passion. With patches of dried paint scattered across her body, she slumps to the floor, fatigue washing over her as her eyes remain fixed upon her creation. Her back hits the wall, the clouds outside spread apart, and the raindrops cease for the first time in days.

Warm sunshine falls upon her figure like petals against skin, and her lips tear apart into a smile that turns her eyes into crescents while her heart swells with pride. With the world as her canvas and the sun as her muse, her worries of youth are nothing more but rivers of paint against stone.

The Renaissance: My Greek Orthodox Easter / Photo of Nature
May 2, 2022