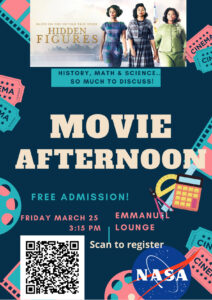 On Friday, March 25, the KMHS Culture Club hosted a viewing of the movie Hidden Figures in honor of Women’s History Month. The viewing took place in the Emmanuel Retreat House and lasted from 3 to 6 P.M. Snacks and water were also provided.

Hidden Figures is about three brilliant African-American women who work at NASA. . These women, Katherine Johnson, Dorothy Vaugghan, and Mary Jackson, played pivotal roles in launching John Glenn, the first American to orbit the Earth, into orbit. The movie focused on their work and struggles as women of color in a male-dominated field.

After the movie, the students discussed the movie with several teachers, including Mrs. Farrell, Mrs. Bernardini, Mrs. Frem, Mrs. Riiska, and Mrs. Marconi. They talked about the movie’s inaccuracies, the discrimination women face in S.T.E.M. careers, as well as their personal stories.

Junior Micaela Maywald attended the event and said, “The movie inspired me and gave me hope because it showed me I can make a change in a S.T.E.M. career.”
The movie viewing was a fun, informative experience for all who attended.

The Drama Club Amazes Crowd With Performance of Fiddler on the Roof
November 30, 2022