November 1; A Holy Day of Opportunity 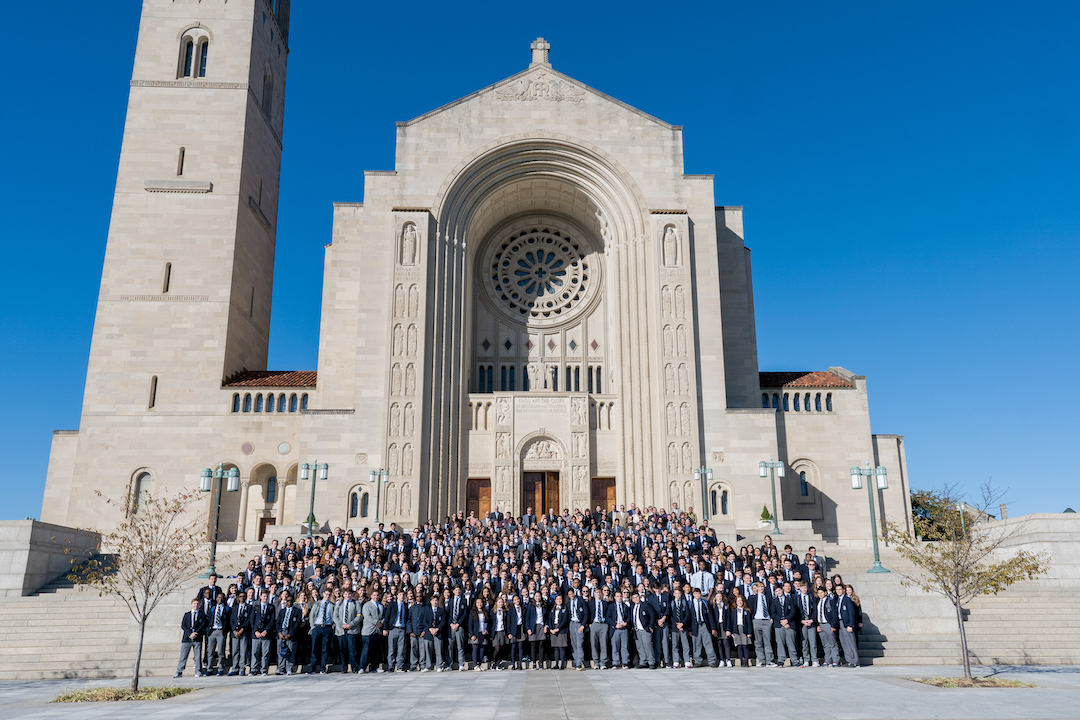 On the Solemnity of All Saints, November 1, Kellenberg Memorial High School took advantage of the school day with a Holy Day of Opportunity offered to all students in grades 6 through 12. With activities and experiences both on campus and off, students participated in the celebration of All Saints Day in a variety of ways.

Freshman students kicked off their Holy Day of Opportunity with the annual F.A.I.T.H. Day (Freshmen Ascending In Their Homerooms). FAITH Day is an annual spiritual event and homeroom competition that concludes with a tug of war between the two homerooms who amass the most points throughout the competition. The day began with the celebration of Mass for All Saints Day. Members of the X.L.T. Band provided the music for the celebration for all those gathered in the gymnasium. Following Mass, Freshmen were treated to a mid-day prayer service by Array of Hope in the auditorium, followed by the competition events on St. John Field. The students of homeroom 9H took home the trophy after defeating homeroom 9K in the tug of war. (A very big thank you to Array of Hope for spending the day at Kellenberg Memorial!) (Photos from the event may be found here.)

At the Seminary, sophomores and juniors celebrated Mass with Fr. Thomas Cardone, S.M., Chaplain of Kellenberg Memorial High School. Fr. Thomas spoke of his time of formation at the seminary and the significance and history of the institution. After Mass, students were given a spiritual presentation by Mr. Alex Basile, Chairman of the Religion Department. Following lunch, sophomores and juniors were able to explore the grounds of the 93-year-old seminary. In the fields of the Seminary, games and activities were set up for students’ free time in the afternoon. (Photos from the event may be found here.)

The pilgrimage to the Basilica of the National Shrine of the Immaculate Conception began at Kellenberg Memorial at 5:30 AM. Students gathered and departed on eleven buses to the nation’s capital. At the shrine, students joined the noon Mass celebrated by the Most Reverend Christophe Pierre, Apostolic Nuncio to the United States, assisted by Sergio Arreaga ’19 serving as an acolyte for the Papal Nuncio during the Mass. Students enjoyed the music at the Mass provided by the National Shrine’s choir. After lunch, Kellenberg Memorial students were given a special tour and presentation on the history and foundation of the National Shrine by Director of Pilgrimages, Msgr. Vito Buonanno.

The Catholic University of America provided for our students a campus tour and presentation on the University, and many Kellenberg Memorial alumni met up with students and faculty on campus during the visit. (Photos from the event may be found here.)

Throughout the day’s events, members of the senior class of 2020 served in various capacities at each event. Community Marianist Leaders served in their Latin School or Freshman homerooms during WITNESS Day and FAITH Day events, while other seniors helped with the liturgical responsibilities of the day. Over a dozen seniors also spent the day at St. Martin de Porres Marianist School in Uniondale, NY, helping fellow Marianist students in the neighboring elementary and middle school. The success of the day was a testament to the enthusiasm and faith of the Kellenberg Memorial students and faculty.